The Age of Robots - photos and video by Yves Gellie [AI, Ethics and the Public Good Series] 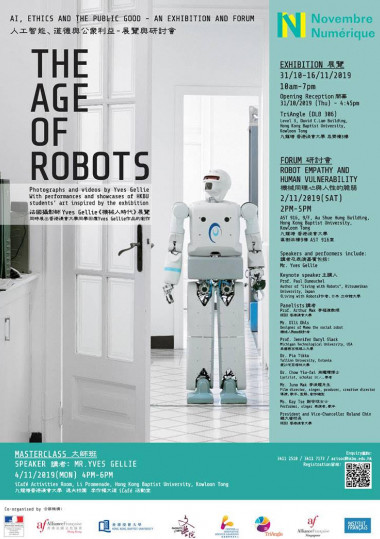 The exhibition is centered on Yves Gellie's series The Age of Robots. Each photograph from this series depicts a “mise en scène” where the robot is the artificial counterpart of humans. The video clips and photographs are based on conversations with residents of EPHAD (nursing homes) on robots' autonomy and portray the mysterious relational space between the human and robot actors. It is the first time an artist has been allowed to make videos of patients interacting with a robot. Once past the surprise phase and aware of the artificial nature of the robot’s functioning, the patients try to forge bonds with it. Empathy is one of the models that is being used to understand humans’ interactions with robots. Yves Gellie shows us humans’ fascination with robots, the irresistible longing humans have to communicate with these artificial machines, where relationships seem simpler, more peaceful.Performances and exhibition of creative work by HKBU students, inspired by the photographs and installations, accompany it

We are the largest language institution for French in Hong Kong and in Asia with over 6,000 students annually.

With our team of qualified native French-speaking teachers, we offer a large range of courses, including specialised courses, private tuition, workshops, immersion days, outings to museums or French dining experience and more.

The AFHK is the only accredited and official examination centre to conduct all the diplomas issued by the French Ministry of Education such as DELF and DALF, TCF and TCFQ.